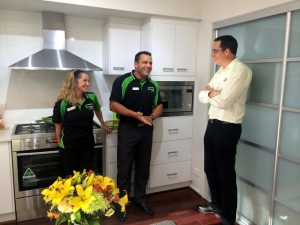 Matt Lowson and his wife Nicky will be looking after the Tweed heads area in Southern Gold Coast, while Ben Rogers and Jace Keirnan will be opening an office in North Lakes to look after the Brisbane North area.

Bringing years of experience in the building industry, both these new offices are set to open their doors for the first time this November.

Matt and Nicky have been operating their Stroud Homes Franchise in Tweed Heads for a while now and are looking forward to opening the doors to their new office, a place where they can meet and talk with people looking to build a new home and show the quality of materials that will be used.

“You’ll see everything with a smile and friendly, happy people wanting to build your home”, Matt says.

It was his passion for building that drew Matt to Stroud and the culture they represent.

“The culture of Stroud is so far removed from the norm when it comes to building companies, they’re a really innovative and forward thinking company and that’s what’s important for me” he says.

Ben and Jace are also set to open their North Lakes Office mid-November and want to encourage first time home builders to come and have a chat, promising that there are no silly questions.

For them it was the functionality of Stroud’s home designs that led them both to become a part of the Stroud team.

“Stroud has some great home designs with really unique facades on the houses, that was something we wanted to be able to offer people as home builders,” Ben tells us.

Both building teams are talking to developers in their areas to ensure there will be some great house and land packages on offer when they both open their doors next month.