Stroud Homes was recently featured in the Fassifern Guardian – the local newspaper in Boonah where Stroud Homes is based. James discusses the factors that have lead to the success of the Stroud Homes group.

TEN years ago, the traffic in Sydney caused James Stroud to make a change that brought him to Boonah.

Now he has a successful construction and design business with soon-to-be eight franchisees and more to come in the future.

James is the owner and operator of Stroud Homes, started his own business in 2011 and has expanded his operations across State borders.

“I was a builder in Sydney, doing work for a company that was based in Brisbane, and I made a complaint to them one day about the traffic in Sydney.

“They said if you don’t like it in Sydney, why don’t you come to Queensland, we’ve got a job that needs to be built.

“That job was the clinic in Kalbar that Doctor Eviston built, so I came up here to do that job.

“I didn’t know where it was. I looked it up on a Google map and I found out it had a couple of dams near it, a couple of mountains and I thought that it could be all right.”

James was apprehensive at first, moving into what seemed like a close-knit town.

“I made an agreement with the company: I said I’m a Canadian guy, I’ve got an accent, sometimes it’s hard to fit into small towns because everyone wants to copy my accent every time I say something.

“It can be a little hard to fit in. Everyone’s already got friends and their family, so I said I don’t think we’ll settle there, we’ll just do the job and move to Brisbane.

“To our surprise, we enjoyed living here almost immediately. It was quite unexpected, so we changed our mind about the place and here we are 10 years later.”

While working in Kalbar, James noticed there was an opportunity in the area and a market gap that he would soon fill.

“As I was building the clinic, we had several requests to quote people’s new homes, so I did some quoting in a manual sort of fashion. It was quite difficult and I didn’t win any work.

“I began to suspect that there was a more streamlined way that I could do that type of thing and I thought the big companies would have some secrets.

“When I started the GJ Gardener group which was a well-known company. I was the youngest owner of one of their franchises and in the last year of my five-year term, I won Franchisee of the Year.

There are a few things that James thinks he can pin his success on, but one that makes him stand out is how he treats his clients.

“I love how relaxed Australians are, but sometimes in business, you have to be really attentive to your customer and I think that there might be a slightly different perception of how it works in North America.

“After I won the award with Gardeners, I had to negotiate a new contract with them, which I never successfully renegotiated.

“But because I had been successful, I was looking for further opportunity and there just wasn’t any opportunity available with them, so I started Stroud Homes.”

It was not the best time to be starting a business that relied solely on the housing market, but James and his family bucked the trend and created a successful start-up.

“It wasn’t a great time for selling and building new homes for people – property values around 2011, 2012 actually dropped a little bit. People are not extremely keen to build new homes in a time when the value of homes are dropping.

“We thought that we knew what people wanted, what sort of house plans and what sort of look they wanted. So we started working very hard on a range of designs.

“To our surprise, our website started attracting enquiries from areas well outside of where we could build.”

The next step for the business was a logical move for James, as he already had a wealth of experience in the area.

“Because we had that background in franchising, it was quite a natural thing to think, ‘If customers want to build our homes on the Gold Coast, in Toowoomba or Tweed Heads, perhaps we should find a builder there to build them for us’ – so that’s what we did.

“Our first franchisee on the Gold Coast has now been in business for just over a year. In that year he has managed to use the Stroud Homes’ system to sell 21 new homes and put the slab down for 10 of those homes – which is quite a steep and successful startup curve for a new builder.

“And as such we’re quite pleased with his success.”

Stroud Homes have used their first franchisee as a foundation and example for further expansion across the country. “We believe his success proves the viability of our model.

“We’re now in the process of signing up the eighth franchise and I’m starting to travel down into New South Wales to Newcastle, Wagga, Liverpool – and we’ve got a fellow in Epping who’s coming to meet our franchise team up there.

“So we think we’ll soon be in the double digits and continue to grow from there.”

“Stroud Homes is different from most of the other businesses along the street. For this business, the money to pay Sam and Amanda in the office, myself and my wife, comes almost entirely from out of Boonah.

“Sam and Amanda are local. My wife has a particular shopping routine: She stops at the fruit and vegetable shop first, then to the butchers, then the health food shop and, if there’s anything else left after that, she goes to IGA.

“We believe that’s the way it should be done. We’re very grateful that Boonah let us come and be part of the community.”

Other than his North American customer service, James thinks it’s Boonah hospitality that helps make his business stand out.

“I love the people in Boonah and they know they’re not finished work until the work is finished.

“Sam and Amanda won’t leave here, even if we’re dealing with a New South Wales franchisee until the work’s done.

“They give that country style service. They understand that there’s no excuse to not be friendly and pleasant on the phone.

“I believe that’s Boonah culture and I think for a company like Stroud Homes to benefit from the friendly Boonah culture is a breath of fresh air – especially when you get a guy joining our group from Epping in Melbourne, and we get comments that Amanda and Sam are so friendly, accessible and always willing to help out.”

“We get comments that Amanda and Sam are so friendly, accessible and always willing to help out.”

Business is done differently in Boonah; James found this out while at lunch with his designers.

“We just had an experience, where we went to the Wild Grain restaurant for lunch with our graphic artists.

“Then the photographer who took the photos of the motorcycle was having lunch there as well.

“It’s so easy to get things done, you don’t often realise unless you’ve come from Sydney and you have to drive somewhere to do everything.

“It’s just the beauty of living in a town like Boonah, it’s so easy.”

James said his business suffers little from being located away from the city.

“We do a lot of online conferences with our franchisees, we have two weekly meetings here on Skype.

“The rent on the offices is great. If we were in Brisbane it’s quite possible we could be spending five times the amount compared to here.

“What I love about Boonah is I can be sitting in here using the latest video technology to have a conference with people across the nation and then I can step outside and talk to someone that’s been branding cattle.” 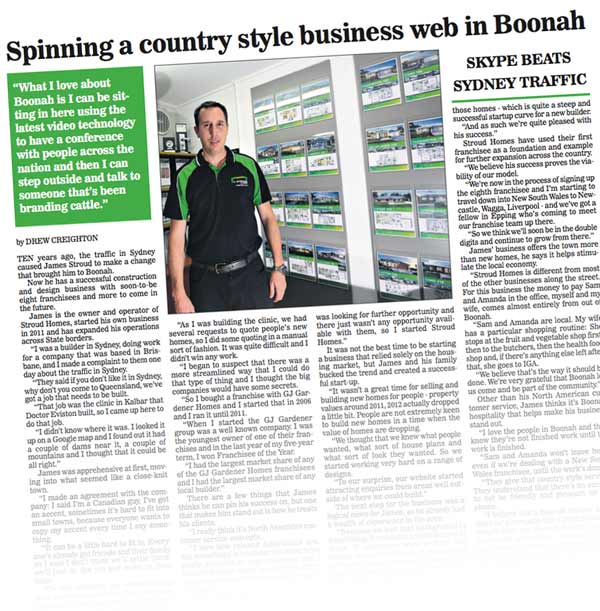